New Jersey Gov. Phil Murphy has been good to the East Coast Gaming Congress, showing up as the keynote luncheon speaker in his first two years in office of 2018 and 2019.

Last year’s annual event was canceled due to the COVID-19 pandemic, but Murphy agreed to make a third visit to the 2021 event in Atlantic City — which would have made him the first governor in the event’s 24-year history to do so.

And while a statewide state of emergency due to flooding concerns left Murphy not attending the event at the Harrah’s Waterfront Conference Center on Tuesday in person, aides scrambled to set up a “virtual” appearance anyway via giant TV screens.

Supporters of a variety of hot-button issues hoped for Murphy to make a hard-hitting statement at the event traditionally seen as an opportunity to make news in front of casinos CEOs and media.

Hundreds of Atlantic City casino employees and their supporters, for instance, rallied outside Harrah’s Tuesday morning to press for Murphy to go beyond his previously announced willingness to sign a casino smoking ban if such a bill reached his desk. The protesters sought to have Murphy press state Senate President Stephen Sweeney — a fellow Democrat who may be the only obstacle to passage of such a ban — to allow for a vote on the issue during the lame-duck session after the Nov. 2 election.

Others thought Murphy, in the wake of a conference panel on Monday that clarified that an eSports “cleanup” bill to make it easier for sportsbook operators to offer wagering on major events in that burgeoning industry is languishing on his desk, might announce his intentions on that matter.

As for the casino operators, they would have been gratified to hear Murphy back a bill in Trenton that would exempt them from having their payment-in-lieu-of-taxes (PILOT) include online casino revenue totals, given that the bulk of such profits remain with the casino partners who run such operations.

But Murphy’s 15-minute speech — with no time left over for media questions — did none of those things, instead consisting of a list of accomplishments or goals designed to refurbish the city itself.

Murphy’s physical absence was ultimately not a surprise, given the timing of the conference and the rainstorm. Media speculation has Murphy’s re-election bid getting more perilous against Republican challenger Jack Ciattarelli, and no political adviser would have their candidate take such a risk. It may have been unlikely for a flooding-related tragedy to occur anywhere in the state at the same time that Murphy could be seen glad-handing wealthy Atlantic City casino executives, but the optics no doubt would have led to a flurry of last-minute opposition TV ads of the sort that often hit home with casual voters. 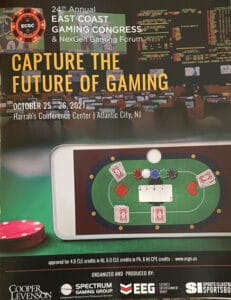 So what did Murphy say?

“This is my third time in four years, and I wanted a four-year sweep,” Murphy said. “I was told I was the first governor to attend in more than a decade — and that told me all I needed to know about the priorities of the previous administration. So I hope that my presence tells you all you need to know about my priorities.”

Murphy also talked about an offshore wind-energy project in the region, plans for the first full-scale supermarket in the city in a generation, and other pending construction projects that he said would reinvigorate the city.

He also lauded state Division of Gaming Enforcement Director David Rebuck, who he said doesn’t always simply accept a casino operator’s request, but does always try to work to find a way for the proposal to fit within existing regulations.

Murphy also touted his signing of a bill into law last year that allows for those convicted of minor drug violations to be able to apply for and receive a license to work in one of the city’s nine casinos. “The state believes in second chances,” Murphy said.

The governor’s absence disappointed the casino smoking ban crowd, who had hoped to sway Murphy in their favor. They have been gratified over the course of the year to see Murphy won over to their side, but they also have learned that the bill is going nowhere unless powerful Senate boss Sweeney also comes onboard.

Nicole Vitola, a casino employee at Borgata and member of CEASE (Casino Employees Against Smoking Effects) who earlier this month traveled to Las Vegas with two colleagues to press their issue, on Tuesday said: “In July 2021, we were reminded just how insignificant our lives are because Gov. Murphy allowed the smoking ban to expire [in July]. No longer will I stand by and watch my friends and coworkers fall ill because of our working conditions. Senate Bill 1878 will close the loophole once and for all and save lives.” 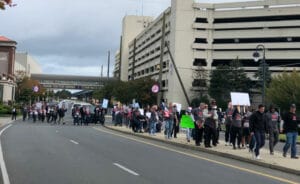 Protestors in favor of a smoking ban march in Atlantic City on Tuesday / Photo: CEASESmokingNJ.com

Lamont White, an Atlantic City dealer since 1995 who also made the trip to Las Vegas, said: “I’m here to appeal to the leaders of this state to ask for humane treatment while we greet, service, and cater to the millions of visitors that feed New Jersey’s economy every year.

“I’m here to ask Senate President Sweeney to show empathy for the thousands of casinos workers at risk for cancer everyday by inhaling second-hand smoke. I don’t know what archaic and outdated information you men are operating from, but it’s 2021, and time for you to show the rest of the country that the lives and health of your citizens really does come before everything else.”